View Video Summary of This Page

View Video Summary of This Page

A 12 bar blues is a chord progression that as strange as it may seem, repeats over a length of 12 bars and when played has a blues' sound to it.

The chords used in this 12 bar blues are an extension to your open 5th chords.

When playing this rhythm style don't lift your 3rd finger too far off the fretboard. This way you can place it down quick and easy for the next time it's used. 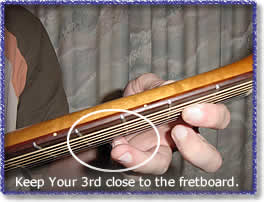 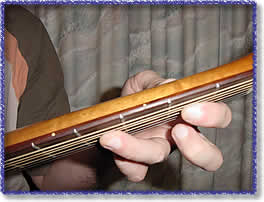 The chord progression below is made up of twelve bars of music. This is where the name 12 Bar Blues comes from. There is four bars of "A", two bars of "D" then two bars of "A" again and so on. Practice the rhythm above for a while before you try to play the chord progression below. Once you have it flowing smoothly, play the 1st four bars of the A chord as written below. If it's a bit hard to count four bars accurately count the amount of times your 3rd finger goes down. If the 3rd finger is placed down two times in one bar, then it will be placed down eight times every four bars. You can do this with the rest of the chords as well.

The next example plays the entire 12 bars show on the tab below.